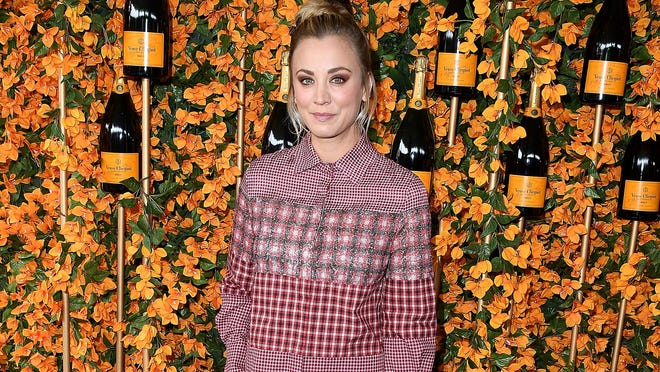 The cast and crew of CBS' "The Big Bang Theory" proved both theories wrong Tuesday night, performing what star Kaley Cuoco declared in a series of heartfelt posts was the show's "final flash mob."

The actress, who plays Penny, revealed that the cast and crew's surprise dance number, set to the Backstreet Boys' 1999 hit "Larger Than Life," had been in the works for months.

Why that track? Cuoco said it's a "song that thanks the fans" but it's also the band's most tech-themed video, which dovetails nicely with the "Big Bang Theory" brand.

Cuoco documented the emotional extravaganza, which she proclaimed "might be one of my favorite moments" from her 12 years on the show. She shared videos and photos from multiple angles on her Instagram page Wednesday.

In the first of seven video clips in the one post, Cuoco and the other series regulars take a curtain call after an episode taping. (In hindsight, you can tell something's up since they're all dressed alike and wearing caps bearing the number "12" in honor of the show's twelfth and final season.)

Then the curtain drops and they're off and dancing on the set of Leonard and Penny's apartment.

Cuoco even posted friends and family in the audience to film the whole shebang from their perspective along with a crying emoji.

The dance was apparently so hyped around the set that co-creator Chuck Lorre, who was on location for another project, deputized a crew member to film it so he could watch it live via FaceTime, earning an emotional response from Cuoco.

"Yes. Chuck Lorre was on location and didn’t wanna miss our flash mob, so he FaceTimed in to watch us dance," she wrote with a crying emoji, adding, "no words . (Beware lots of #bts and teary vids to come during last remaining shows of #BBT)."

Now, sadly, as you may have noticed, one of the core cast members was missing from the mob: Johnny Galecki (Leonard), who Cuoco said had hurt his ankle. "But he was cheering us on from the sides!" she volunteered.

Kaley Cuoco on the end of 'The Big Bang Theory':  'I am already, like, losing it'

Can Sheldon even cry?  'Big Bang Theory' cast is 'super emotional' about the show ending, except Jim Parsons