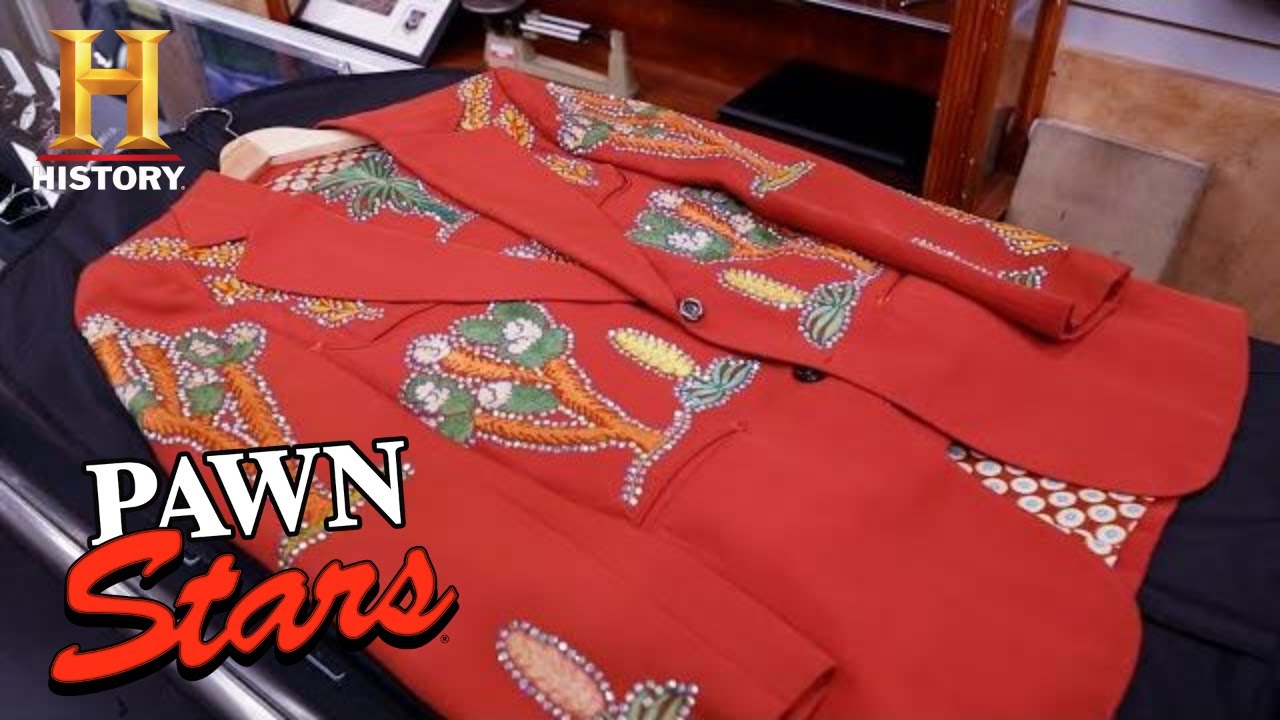 ZZ Top fans who watch the History Channel TV show “Pawn Stars” got a special surprise near the end of the program's first episode of 2021 last week when the legendary Texas band’s guitarist, Billy Gibbons, made a guest appearance involving a pricey suit he had lost more than 40 years ago.

“My dad’s had it laying around the house forever,” says a woman who brought a rhinestone-studded orange suit into the program’s Las Vegas pawn shop for a segment that premiered on Jan. 4. “My dad told me it was ZZ Top’s,” added the woman, identified simply as Dani on the program.

"Pawn Stars" host Rick Harrison quickly appeared at the counter to check out the suit, which he immediately recognized as the work of Nudie Cohn. Born Nuta Kotlyarenko in the Ukraine in 1902, Cohn immigrated to America as a child and opened Nudie’s Rodeo Tailors in Los Angeles with his wife, Bobbie Kruger, in the 1940s.

Their flamboyantly embroidered suits quickly became hot commodities among country music stars including Roy Rogers, Porter Wagoner and Hank Williams. When Elvis Presley wore a Cohn-designed gold-lamé suit on a 1959 album cover, Cohn’s fashions began to attract rock musicians as well. Legendary country-rocker Gram Parsons became well-known for wearing them in the 1960s (including on the cover of the Flying Burrito Brothers’ album “The Gilded Palace of Sin”).

Gibbons and ZZ Top’s Dusty Hill sported “Nudie suits” (as they became known) on the cover of their 1975 album “Fandango.” And the “Pawn Stars” clip shows Gibbons performing onstage wearing the very suit that was brought into the pawn shop.

Midway through the six-minute TV segment, Harrison makes a call, and suddenly Gibbons walks through the store’s door. “We became clients with Nudie in 1972,” he explains. “What you have laid before me brings back a lot of memories.”

Gibbons then recounts how he lost the suit in 1974. “I inadvertently misplaced it — left it on an airplane,” he says. “By the time I realized it was MIA, I called the airline and the cleaning crew had gone in. So I completely thought this had vaporized.

After some discussion about what the suit could be worth — Gibbons suggests perhaps twice the $25,000 its current owner had suspected — Harrison asks Gibbons if he wants to buy the suit back.

“Well, I don’t want to see it walk out the door,” he replies. “If we could make a deal, the Antone’s blues museum down in Austin, Texas, would graciously accept this for one of their displays.”

Here’s where Austin viewers might be wondering: Wait, there’s an Antone’s blues museum?

We checked in with Will Bridges, co-owner of the legendary Antone’s nightclub in downtown Austin. It turns out that museum is an in-process project of the Clifford Antone Foundation, a nonprofit associated with the venue “dedicated to preserving our music culture and community by caring for our elders and investing in our youth,” per its website.

Initial plans were for the “micro-museum,” as Bridges called it, to open in the club’s upstairs event space last summer, before the coronavirus pandemic intervened. “We’re definitely still doing it, the timeline is just uncertain due to COVID,” Bridges said.

Meanwhile, back at the pawn shop, the “Pawn Stars” story has a happy ending. Gibbons and Harrison agreed to pay the woman $40,000 for the suit, splitting the cost between them. “We’ll get you paid,” Harrison tells her, “and then we’ll donate it. Then we’ll get the tax deduction, so it won’t cost me as much money.”

As they walk away from the counter and toward the front of the store, they forget to pick up the suit for a moment. Harrison quickly goes back to grab it. “You know, I did leave this on an airplane once,” Gibbons cracks. “I don’t think we want to leave it twice!”

“Pawn Stars” airs at 8 p.m. central time on the History Channel. The segment with Gibbons is pulled out into its own clip that’s now viewable on YouTube. A week after it was posted, it had been viewed nearly 400,000 times.

Peter Blackstock writes about music for the Austin American-Statesman. He can be reached at pblackstock@statesman.com.